For the first time in a few years, there appears to be some minor increases occurring in club salaries despite the overall Australian stagnant salary position. Although it would be fair to say that management salaries in the Club Industry have not kept pace with inflation in the last few years in line with most other industries.

The areas where slight increases have occurred are in Gaming Managers, Senior Duty Managers and Marketing Managers, although care needs to be taken when assessing these increases as they are more likely to relate to the increased level of experience and qualifications that clubs are now seeking in these key positions.

For the first time in a couple of years I have added a new position to the list which is that of Gaming Analyst/Data Management. Customer connection and loyalty programs are now playing a very significant role in the more successful clubs. The key knowledge and expertise of these analysts will be particularly critical for those clubs that will need to compete more directly with the casino in coming years, whether clubs wish to believe it or not it. Casinos are masters at database and gaming analysis, as many of you would have noticed if you have joined a casino’s loyalty program.

I have also noted an increase in Customer Service or Cultural Managers, which I may very well add to the matrix next year. These roles indicate the customer service focus that successful clubs are taking seriously. I mentioned last year that customer service will be a key battleground for market share against casinos. It’s also worth noting the decline in club gaming market share compared to hotels; whilst I believe there are many elements to this, one of the key areas may very well be the ability of hotels with smaller intimate gaming rooms to better connect with their gaming customers compared to large club venues. I am doing some more research into this recent club loss of market share to ascertain what are the elements driving hotels versus clubs and how might clubs address the issues. My results will be released in one of my regular communications.

New positions that are emerging and will continue to increase in our industry are Café Managers, as cafés in the club environment continue to grow in number, size and significance. Compliance Officers are also a new emerging role reflecting the ever-increasing regulatory responsibilities which committees and boards are demanding compliance with, however there is also some indication of this responsibility being outsourced.

On the issue of outsourcing, which the club industry has also been slow to embrace to gain efficiencies and increased expertise, an interesting example are HR management companies. There is an increase in the level of outsourcing of industrial relations issues due to their complexity and legal implications, also returning to trend that was the practice quite some years ago where recruitment was being delegated to Department Managers.

I wrote last year on the difference between a CEO and the General Manager and following some discussions I’ve had in the last 12 months, I thought it was worth repeating what I said last year. CEO generally refers to the executive of a large complex organisation. For example, a club with several other clubs in its group, or a club with significant diverse interests such as managing a football club or managing other properties. It is generally because of the size and complexity of these organisations that the committee or board delegate a significant proportion of their roles to a senior executive – being the CEO. The CEO role generally requires an increased level of knowledge and expertise in business and more often than not would hold formal qualifications. In smaller and less complex clubs, where the committee or board retain significant operational oversight, the manager would rightly be referred to as a General Manager.

Apart from a loss of gaming market share to hotels, the continued reduction in on-premise alcohol sales is also having an economic impact on clubs. I believe the reduction is a structural cultural change in the marketplace and will probably continue for some time, yet there is also a reasonable decline in overall alcohol consumption particularly in the under 30 market.

Some of this on-premise alcohol sales loss is being offset by increased margins and increased sales in premium products, although some clubs are slow to stock and promote premium products; this will mean increased staff training and awareness of wine and the craft beer environment. Greater minds than mine are trying to predict what the long-term future of bars in a club context will be, if any.

Nothing has changed from recent years in Duty Managers being the most difficult position to fill, again followed, as always, by Chefs.

From our past research, Duty Managers regularly expressed their dissatisfaction with their remuneration. This indicates that their wage does not compensate them for the unsociable hours they are expected to constantly work and the unrecognised responsibility of overseeing the club, quite often when senior management have all gone home in the evening or on weekends.

One of the other consistent complaints from Duty Managers is the lack of training for their responsibilities and conversely, complaints by General Managers of the lack of skilled Duty Managers. The consequences of these findings for the club industry is that we are not attracting skilled Duty Managers to manage our venues. In the busiest times, this of course has a significant impact on efficiency, customer service and staff satisfaction, which can all have an impact on the club’s popularity and profitability.

Again, no surprise that the second most difficult position to fill has been Chefs. They have been, and continue to be, a difficult position to fill. I’ve said in the past that some clubs have been slow to realise the salaries needed to secure Executive and Head Chefs with a proven track record, have increased significantly. More clubs are employing Chefs from four and five-star hotels to get the quality experience and management skills they are looking for and paying what is required. The Chef scenario generally in Australia will continue to get worse until such time as employers and governments realise the responsibility of employing more apprentices. Having said that, the club industry, to a large extent, has been a leader in our industry employing Apprentice Chefs.

Club Training Australia currently overseas apprenticeship training for 140 Apprentice Chefs, with 70% of those employed in the Queensland club industry. DWS in the next two months will release a new initiative to attract more high school and mature aged students to be Apprentice Chefs and create better links between industry and students to engage Apprentices and Chefs.

If you are seriously considering giving young people the opportunity of becoming a Chef, or for that matter older members of the community looking for a career change, why not give Aaron Bray, Club Training Australia’s General Manager, a ring on 0447 464 333 or 07 3878 9877 to discuss the opportunities.

For the first time this year, we have noticed a levelling out of the number of employees in the club industry overall. Whilst many larger and more successful clubs are still employing, there is a very large number of small to medium clubs who are reducing staff numbers.

The success, increasing size and significant improvement in the quality of standards and services in many of our more progressive clubs, is now requiring an increased level of management expertise in a range of areas, which is naturally flowing through to recruitment. However, as I’ve also said in the past, there is a significant increase in new entrants into the club industry who are hospitality specialists, but not from the club industry or with a club background.

The forecast increase in demand for hospitality and tourism workers between now and 2020 is approximately 20,000. To prepare for the increase in demand, the Queensland Government has created a roadmap called the Queensland Tourism Workforce Plan. This plan recognises the influx of extra visitors expected over the coming years. Forecasters predict that the key occupations will be for Chefs, Transport Drivers, Café/Restaurant/Hotel Managers, Kitchen Hands, Waiters and Baristas. 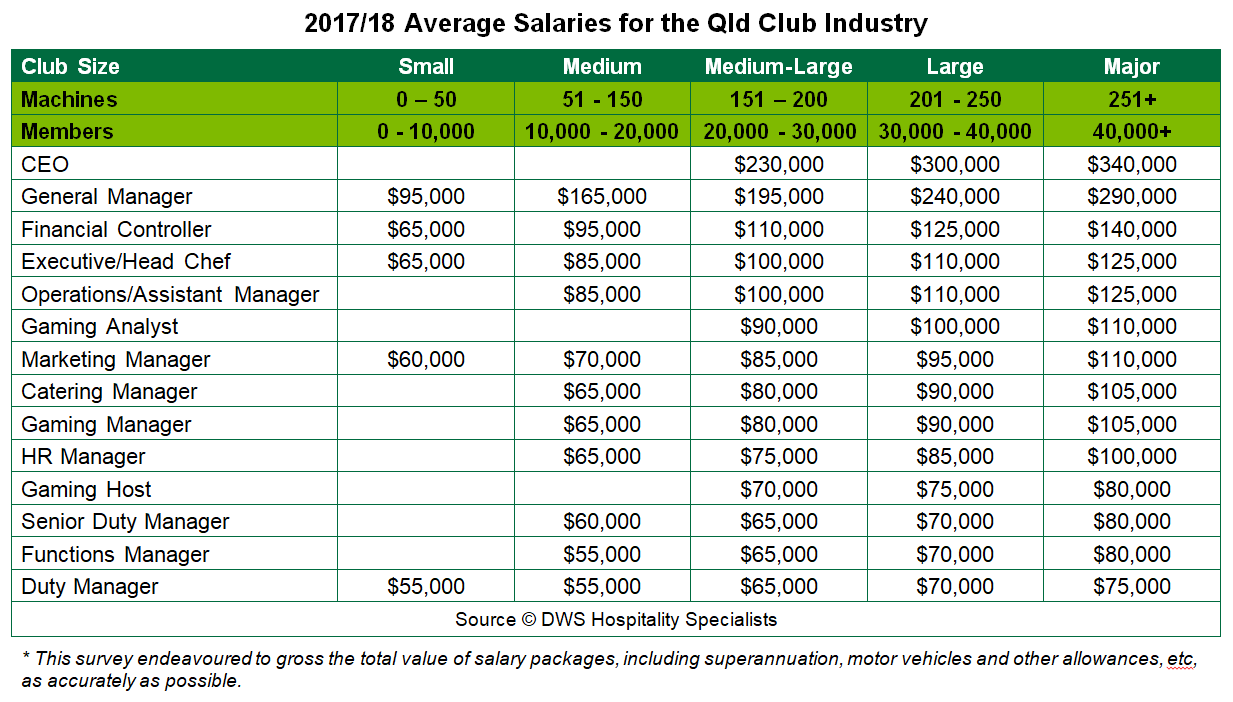 The salary averages table above is generated from industry surveys, salaries for new management recruited positions, numerous club salary reviews and management restructure over the last 12 months, as well as our own empirical evidence. It indicates the various salary averages paid in clubs of varying sizes. Whilst these averages should not be taken in isolation from a club’s own situation, it does provide a general guide.

Facts relevant to individual clubs that should be considered are KPIs (Key Performance Indicators), strategic achievements, profitable performance, additional management (such as sporting teams, other venues or other commercial interests), qualification and experience of a candidate, and the needs of the club. Many regional clubs are also finding that they must pay a premium, particularly to get highly skilled staff to relocate.

Tertiary qualifications are continuing to be an expectation for senior positions in the club and hospitality industry, as is the inclusion of set KPIs and bonus structures attached to the KPI criteria. This is largely due to the increased management responsibilities, skills and professionalism required in the club industry and in other areas of hospitality and tourism, particularly in today’s larger progressive clubs.

With the increasing performance anticipation of progressive clubs, there is an expectation of increased accountability being placed on managers. This is being more readily assessed by performance reviews against job specification, budgets, KPIs and EBITDAR (Earnings Before Interest, Tax, Depreciation, Amortisation and Rent).

Many committees and boards are no longer satisfied with merely profit but are actively seeking improved performance against industry benchmarks. This is bringing the club industry in line with other commercial enterprises, where managers are expected to perform against agreed measures. In some cases, this increased expectation is putting pressure on managers who lack commercial experience and/or don’t hold tertiary qualifications.

Club labour costs have traditionally been quite high compared to the overall hospitality industry benchmarks and as the progressive clubs work to reduce their labour costs. This may mean they will be more selective in the quality and talent of new staff.

Selecting the right management is becoming increasingly complex and fraught with risk. We are still seeing the failure of clubs due to poor oversight by committees and boards of their selection process. The cost to a venue in employing the wrong management staff can have tragic consequences for several years.  Regrettably, I have had too much experience of this over the years. Committees and boards have a fiduciary responsibility to their members to ensure that they are attracting the best quality management staff and are paying the appropriate salaries to attract and retain competent personnel.

Given the responsibility and skills required of the senior manager role in today’s club environment, boards and committees should consider independent expert advice when recruiting, conducting reference checks or setting salary levels. It pays to remember that good staff will choose to work for good employers and stay where they feel appreciated. The right and fair remuneration will always play a significant part in this decision.